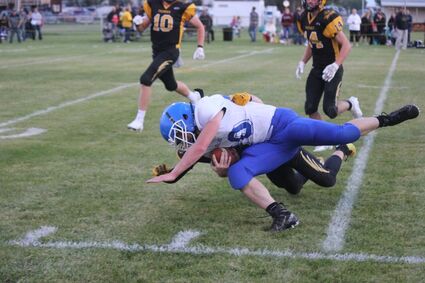 Ethan Frye is tackled by a Mon-Dak defender during first half action in Grenora.

Fall sports seasons are now in full swing as both the volleyball and football teams played games over the weekend. CCHS football lost a nail-biter in Grenora on Friday night, 36-42. The 'Dogs trailed early but battled back to take the lead with three minutes remaining in the fourth quarter before eventually losing to the Thunder.

The volleyball team played in a tournament in Fairview on Saturday to kick off their season. Out of ten sets, the girls went 5-5.