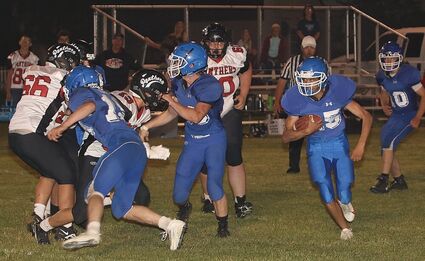 Avory Matthews carries the ball in the fourth quarter during the Dogs' 20-46 loss last Friday at Rowley Field.

Blue was able to drive the ball some early, although Park City's defensive front was wreaking havoc on the Dogs' running game. In the first half, three Bulldog drives stalled out in the red zone. The Dogs didn't help themselves much either, as false starts and holding penalties kept causing them to get behind the chains.

CCHS did another fair job of shutting down their opponent's run game. Park...