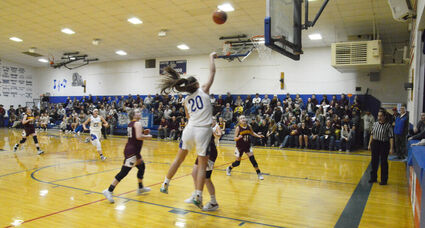 Nasya O'Connor (20) goes up for two during the Lady Bulldogs' victory over Baker on Tuesday night in Ekalaka. Basketball stats and scores can be found on page 8 of this issue.

After being down early in Broadus, the CCHS Lady Bulldogs stormed back to take a 17-point victory over the Hawks last Friday. A balanced attack was key for CCHS as five players scored, four of whom finished the game in double figures. CCHS had 13 turnovers, Broadus had 22. As a team, Ekalaka also had nine assists and 16 steals. Most of their scoring came from inside the arc where they shot 51 percent (21 of 41). They shot 3 for 12 on three-pointers. Heidi LaBree led CCHS in points with 19 and rebounds with 8.