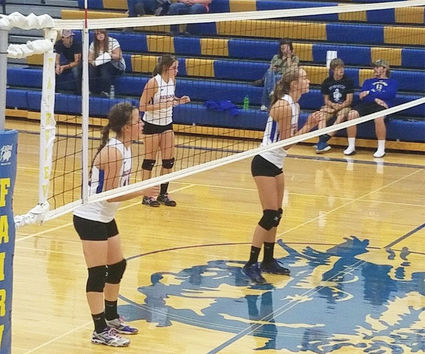 CCHS volleyball opened their 2017 season by taking third place in a tournament at Fairview last Saturday. Ekalaka dropped the first match to Wibaux, losing the first 22-25, and the second, 21-25.

The next match CCHS played was against Richey/Lambert. Blue came back strong, winning the first set 25-17, and the next 25-19. In the first set, Hannah LaBree served an nine consecutive points.

The girls handily won their next match against Westby/Grenora. Though the first set was 25-19, they held MonDak to only nine points in the second set.

In their fourth game, the girls took on Fairview. Fairview proved to be a tough team. Lady Blue dropped the first set by 10. The second set was much closer, but Fairview edged them out in the end, 27-25.

This Friday CCHS volleyball will travel to Broadus for games at 5:30 and 7:00 p.m.