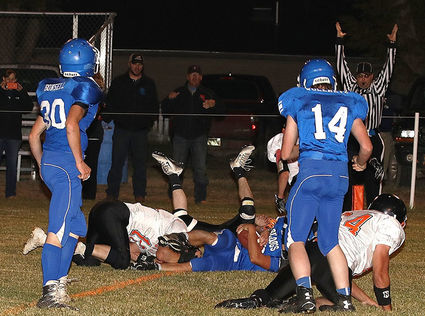 Mick O'Connor goes up for a pass against Jordan last Friday night at Rowley Field.

The Bulldogs showed improvement on Friday night during their last home game of the season versus the Jordan Mustangs.

Early on, blue shut down Jordan's run game, forcing them to throw the ball for much of the game. There were only a few plays throughout that Jordan was able to run the ball when outside backers for the Bulldogs gave up contain on the outside.

Most of Jordan's long pass plays were right up the middle of the field, either on short dump offs to pass protectors or down the field in between Blue's deep zones.

CCHS ran the ball effectively most of the game with improved blockin...