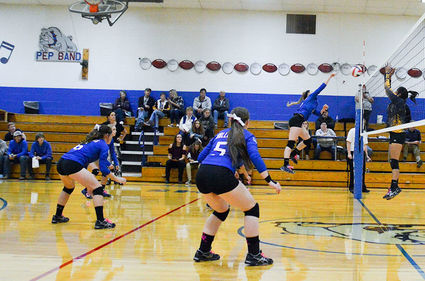 Tori Tooke elevates to spike the ball in a match versus Northern Cheyenne last Friday.

On Friday October 13, CCHS volleyball played Northern Cheyenne at home. The Bulldogs managed to start off strong, taking the first set, 25-9. In the second set, head coach Michelle Tooke got some reserves into the game for valuable playing time. The girls struggled to communicate and the set came down to the wire. CCHS came from behind at the end to win, 25-23. The third and final set was won by Lady Blue, 25-5.

This Friday CCHS netters will travel to Terry. On Saturday, they will play at home versus the Circle Wildcats.