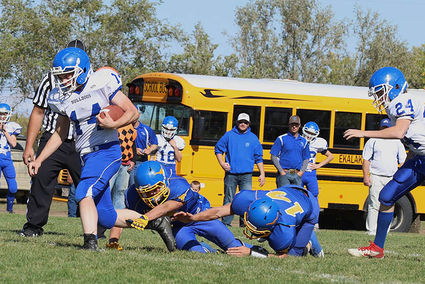 Bulldog senior Cameron Wolenetz runs for a touchdown in a game against Wibaux earlier this season.

CCHS men finished their football season on a high note last Thursday afternoon when they defeated Froid-Medicine Lake by a wide margin. The win was the second win for Blue in five days, giving them a 2-7 record to finish the season.

The Bulldogs will graduate one senior this year, Cameron Wolenetz. Wolenetz played four years of football under head coach Tenadore Kittelmann. He played mostly defensive end and offensive center in his career, although he did get some time at fullback this year. Wolenetz scored the third touchdown for Blue in their game against Medicine Lake.