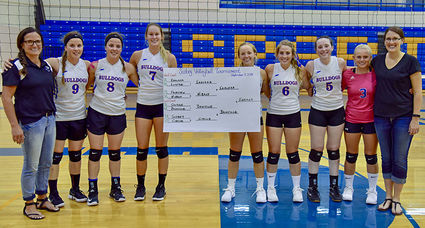 To place in pool play, CCHS played one set to 25 against three different teams. Blue won all three of those sets and entered an 8 team single elimination tournament in first place.

Their first set saw CCHS narrowly defeat Scobey, 25-23. The team had an impressive 23 digs. Hannah LaBree led with 7. Whitney Kittelmann led in assists with 5 of 11.

In the second set the Dogs took down Wibaux, 25-14. Claire Callahan and Gracie Tooke each had three ac...