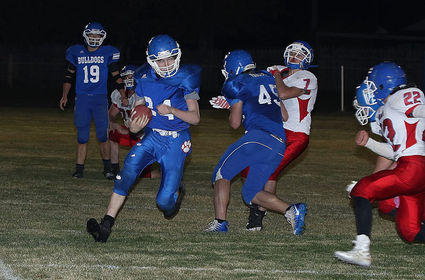 CCHS senior football players Caleb Fix and Mason Lovec will remember their final home game as a win after the Bulldogs trounced the Center-Stanton Wildcats 54-22 last Friday at Rowley Field.

CCHS took control of the game early on with a 25 yard touchdown run from Fix.

On their first defensive series of the game, defensive ends Mick O'Connor and Caleb Fix forced three Wildcat fumbles. All three were recovered by the Wildcats and the third was recovered in the end zone, tying the game at 6.

On the next possession, freshman Turner Tooke connected on a 43 yard pass to O'Connor. A pass from To...