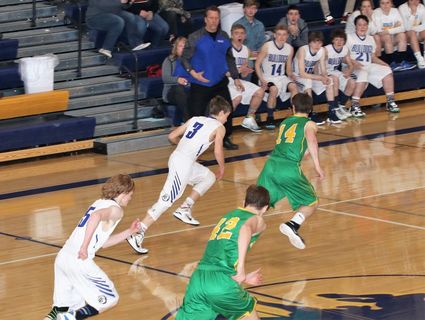 Freshman Turner Tooke heads for the game winning layup after stealing the ball from a Broadus player in overtime of Saturday's consolation game at the District 4C Basketball Tournament. The Bulldogs won, 47-45.

The CCHS boys basketball team opened their tournament play against the Rebels of Custer/Hysham. The Bulldogs had a big first quarter, outscoring the Rebels 18-2. They were up by 31 at halftime. The game was light on fouls. Combined, the teams shot only 16 free throws and committed 17 fouls. The boys cruised to a forty point opening win, 61-21. Jared Pardee was the games high scorer with 23 points.