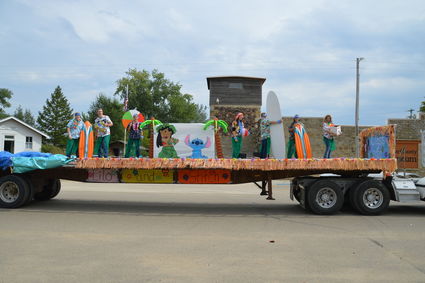 The CCHS senior class had a "Lilo and Stitch" inspired float for this year's homecoming parade. Classes decorated windows at downtown businesses and their floats based on a Disney theme for CCHS Homecoming.

The CCHS Bulldogs improved their record to 2-0 on the season with a win over Plentywood last Friday night at Rowley Field. The game was homecoming for the Bulldogs, and they did not disappoint their hometown fans.

Early in the first quarter, the Bulldogs drove the ball down the field with a consistent run game. The drive was capped on six yard touchdown run by sophomore quarterback Turner Tooke. Tooke fumbled the snap but quickly picked the ball off the turf and scampered into the end zone, scoring on what was a broken play. Senior Mick O'Connor ran in the two-point conversion to give Blue...