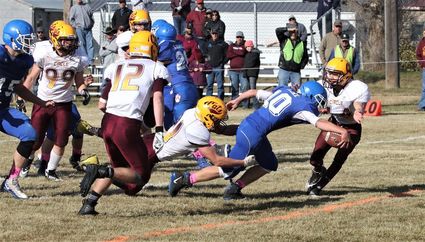 Turner Tooke lunges for the end zone on the first of his three touchdown runs vs. Circle on Saturday.

The Bulldogs didn't play their best football last Saturday, but it was still good enough for them to get the win over Circle and secure a spot in the Montana 8-man playoffs.

In the first quarter, the Dogs moved the ball okay on offense, despite several missed blocking assignments. Twice they fumbled the football while deep in Wildcat territory. They also were forced to punt on one possession.

Circle, meanwhile, had their own problems on offense. Bulldog junior Ryan Rychner intercepted a Wildcat pass early in the first quarter. Later, Mick O'Connor blocked a punt that was recovered by Jared...