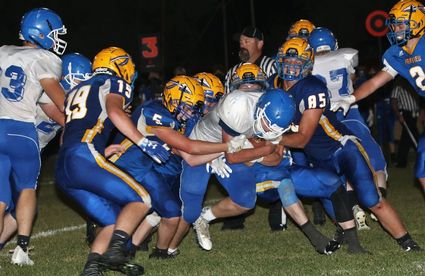 Senior Jared Pardee runs the ball as a host of Warrior defenders attempt to tackle him during the Bulldogs' season opener in Fairview last Friday night. CCHS battled the defending state champions for four quarters, eventually losing the contest by eight points.

The Carter County Bulldogs played their first football game of the season in Fairview against the defending Montana 8-Man state champion Warriors last Friday night. On their opening possession, Blue marched down the field and scored on an option play, taking an early 6-0 lead as they failed to convert the two-point conversion.

The Dawgs were visibly more physical than the Warriors and ran the ball successfully throughout most of the contest. For the most part, the only thing that stopped their run game was a couple of costly holding calls that put them behind the down and distance, and a f...