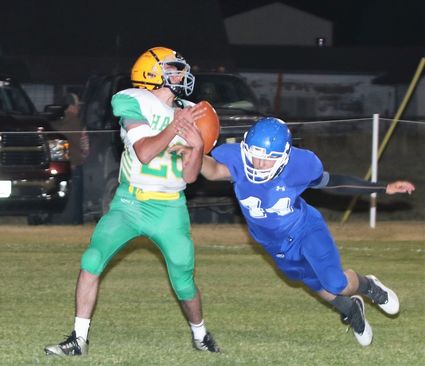 Brennan Graham breaks up a Broadus pass play in the end zone on Friday night at Rowley Field.

CCHS marched down Rowley Field on the game's opening possession at home versus Broadus last Friday night, scoring on a 1-yard run from Jared Pardee. Ryan Rychner ran in the two-point conversion to give the Dawgs an 8-0 lead four minutes into the first quarter. The Hawks scored on their first possession too, about a minute and a half later on a 40 yard pass play. Their conversion failed.

On their second possession, the Dawgs continued to move the ball on the ground. The drive was capped on an 8-yard Pardee run. He also ran in the conversion and Blue took a 16-6 lead at the end of the first quarter.

In the second quarter, Blue scored on three different run plays from Pardee and junior quarterback Turner Tooke. Their pass defense allowed two more Broadus scores though, and they took only a two touchdown lead into halftime.

A few adjustments on pass defense coming out of the half proved favorable for the Dogs as they held the Hawks scoreless after the break. Tooke ran in Blues first score in the third from 12 yards out.

On the next Hawks possession, Pardee picked off a screen pass from the defensive end position and returned it for a score. Shayne Enos ran in the two-point conversion. A 27-yard run from Seth Kennedy late in the third quarter led to a running clock for the remainder of the contest as the Dawgs went up 58-20.

In the fourth quarter, several younger players got in the game for some valuable playing time and continued to shut down the Hawks' offense. Late in the contest, sophomore Sean Wolenetz threw a touchdown pass to J.W. Elmore for the games final score. The conversion failed, but CCHS came away with a 64-20 victory.

CCHS now has a 1-1 record on the season. This Friday, they will travel to Culbertson to face the Cowboys.