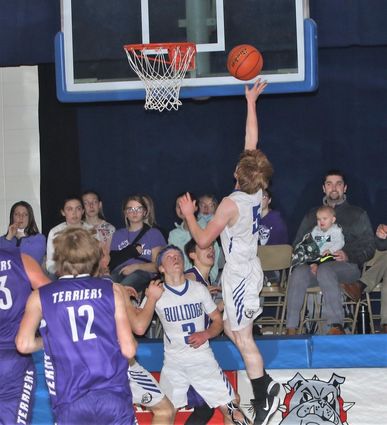 Senior Seth Kennedy takes a layup versus the Terriers in Ekalaka on Saturday.

The CCHS Bulldogs had a big weekend at home, playing three games in three days against conference opponents. Blue got down early against Melstone on Thursday and never could complete a comeback. They were down 6-22 at the end of the first and eventually lost 42-56 after narrowing the Bronc lead to eight points several times in the second half. Senior Jared Pardee led the way for CCHS with 13 points, nine rebounds and six assists. Turner Tooke added 12 points.