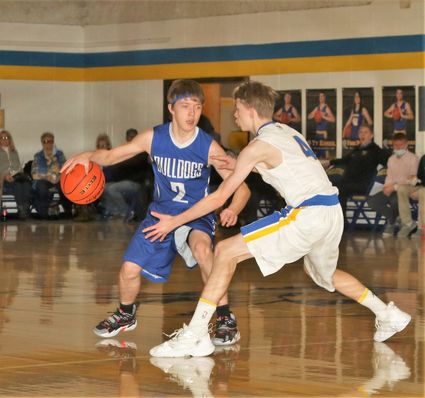 Freshman Ethan Frye attempts to dribble past a Bronc defender during a JV basketball game in Melstone over the weekend. CCHS basketball stats and stories can be found on page 8.

Last Tuesday, CCHS JV boys lost a high scoring game in Broadus. The Bulldogs were down 16 points after the end of the first quarter and lost the game by 32. Eleven of the 12 Hawks players that were suited for the game scored. The Hawks' Tytan Hanson led all scorers with 18 points. Jaden Pardee scored 12 for CCHS. The Dogs went 6 of 14 from the charity stripe.