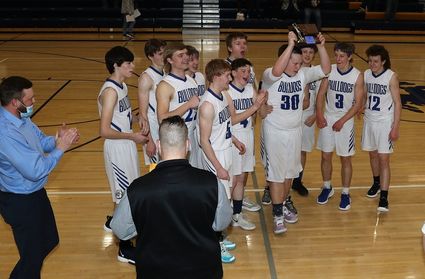 The CCHS Bulldogs took third place at the District 4C Basketball Tournament in Miles City over the weekend. Their first game at the Southern C Divisional Tournament is at 7:30 p.m. on Thursday vs. Harlowton/Ryegate.

CCHS will head to the Southern C Divisional in Laurel for the first time since 2019 when they defeated Broadus to finish third at the district tournament. That win came on a last second steal and score from then freshman, Turner Tooke. This year's third place finish at districts ended in another close game, this time over Wibaux. Broadus, meanwhile, defeated Melstone in the championship.

The five-seeded Bulldogs lost to four-seeded Wibaux in the opening round by 8 points. The game was tied at halftime, but Blue went down by 10 to end the third quarter and couldn't make up lost ground in the...