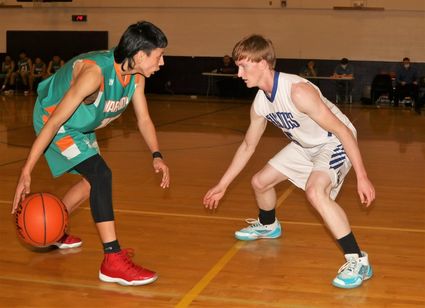 CCHS ended their basketball season at Laurel Middle School on Friday after losing to Plenty Coups in a loser-out game at the Southern C Divisional Tournament. Bulldog fans were split during the contest, as the girls were playing their semifinal game against Jordan at the same time at the high school in Laurel.

In first-round action, CCHS had moments were it looked like they might pull off the upset over Harlowton/Ryegate. The game was much closer than the final score might suggest, 47-62. CCHS played pretty much the entire game, and entire tournament, without senior leader Jared Pardee who was unable to go with an arm injury he suffered at the District 4C. The Dogs had the game within reach several times, but ultimately they were unable to overcome their 21 turnovers and poor free throw shooting. They went 5 of 15 from the charity stripe. Harlowton/Ryegate turned the ball over 11 times and went 10 of 19 from the line.

In their loser-out game against Plenty Coups, the 'Dogs were down twenty points at halftime. They never gave up, and had the Warrior lead down to 3 points at one point in the second half before Plenty Coups pulled away late to win by 15. Both teams had 19 turnovers in the game. Sophomore Tucker Tooke started the game in place of Jared Pardee and came up big for CCHS with 18 points before he fouled out midway through the fourth quarter. Junior Turner Tooke hit 4, three-pointers and finished the game with 14 points. CCHS will lose seniors Jared Pardee, Seth Kennedy, Ryan Rychner and Shayne Enos next year.