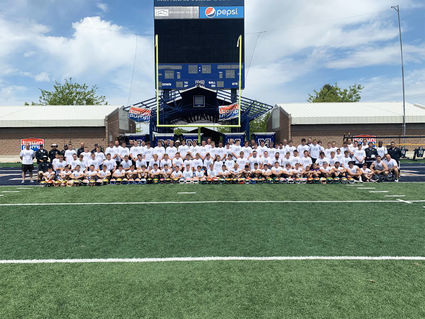 Leaders, Legends, and Legacies (LLL) organizers are excited to announce that this year's camp will be located in Ekalaka. This full-contact camp is coached by former and current college, NFL, and arena players from across the country. The camp's focus is on specialized position training and true life experiences to build character and leadership skills for all that attend. Founded in 2008, the camp is overseen by Ty and Sarina O'Connor.

One of the coaches this year is former Montana State University linebacker, Tennessee Titan long snapper/linebacker, and current defensive assistant coach for the Dallas Cowboys Kenny Amato who will be flying to camp from Nashville. He is also getting inducted into the Montana Football Hall of Fame on Saturday following camp. Amato will share an amazing story about his perseverance for football and life.

Former Pac-10 coach and MSU quarterback Shawn Kraft will also be at the camp. Kraft is one of the best coaches that LLL has ever had and will leave participants amazed with his knowledge of the game and specialized skills that campers can take to work on back at their programs.

Former University of Wyoming player Marcus Harris who was an All-American wide receiver and won the Fred Biletnikoff Award as the best college wide receiver in the nation will also be coaching at the camp. Harris is considered one of the best to have ever played for Wyoming and went on to play for the Buffalo Bills. He is the only receiver in NCAA history to have had 1400 yards in three consecutive seasons and is ranked 4th in career receiving yards in NCAA history. Harris is one of the most humble individuals LLL campers will ever meet, but the skills he teaches go far beyond just playing the game he dominated.

Above are just a handful of the coaches at this year's camp. In total, there will be over twenty coaches traveling to Ekalaka to help. All of them have great leadership skills to teach the kids. They will also be able to fine tune LLL attendees on football techniques that will improve their game regardless of age or skill level.

LLL camp will provide housing and meals for the duration of the camp. In addition, two scholarships totaling $1500 will be awarded.

Look up Leaders, Legends, and Legacies on Facebook for more information and a registration form. LLL is a non-profit organization. The camp has a $50 dollar entry fee. Free shirts will be given to the first 100 campers that sign up. The camp is for all football players in grades 7-12. Campers will be split into different age groups.