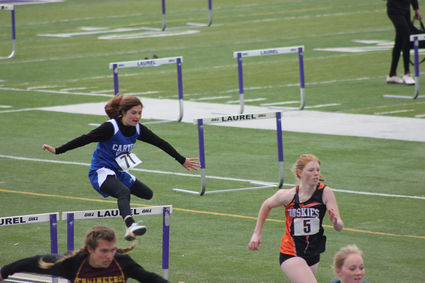 Freshman Brynn Loehding competes in the hurdles at the Southern B/C Division meet on May 20 in Laurel.

One sophomore and two freshman will represent CCHS at the MHSA Class AA-C State Track & Field Meet in Missoula this weekend.

On the men's side, freshman Ethan Frye will compete in the 110 meter and 300 meter hurdles. Frye finished fifth in the 110m hurdles at the Southern C Divisional meet in Laurel, one-hundredth of a second behind fourth, and sixth in the 300m hurdles. He also competed in the 200m and was a part of the CCHS 4x100 relay at the divisional meet in Laurel.

On the women's side, freshman Brynn Loehding will be competing in the 300 meter hurdles at state after a fifth place...