Bulldogs get much needed win over Dogies 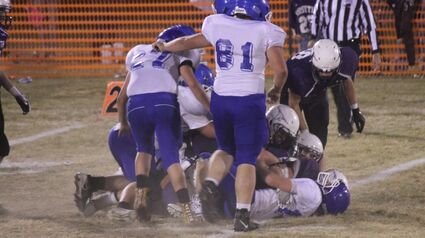 The Bulldogs strung together a few long drives that resulted in touchdowns against the Dogies in Forsyth. Minimal passing was used as CCHS chewed a lot of time off the clock by keeping the ball on the ground. Above, Turner Tooke is on the bottom of the pile after being tackled by a host of Forsyth defenders.

The Bulldogs traveled to Forsyth last Friday night and got a much needed win over the 1-5 Dogies. The Bulldogs led for most of the game.

Most of Forsyth's scoring came on large chunk plays, both on the ground and through the air. The Dogs, though, were able to rip off a few big scoring plays of their own. In addition, they put together a few long, scoring drives in which they chewed up a lot of clock by working the ground game.

A pivotal point in the game came for the Bulldogs after a block in the back call and a holding call had them backed up way behind the chains. Facing a third down a...