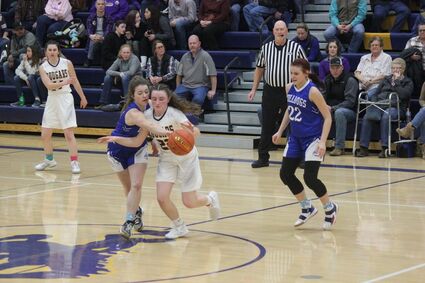 Heidi LaBree attempts to steal the ball during the Lady Bulldogs' 38 point win over Plevna in the opening round of the District 4C tournament in Miles City.

The Lady Bulldogs went into the District 4C tournament in second place, behind only Melstone. In their first game on Thursday, they defeated Plevna, 63-25. Three Lady Bulldogs finished the game with double-digit points, led by Tyra O'Connor with 16. Kendra Tooke had a team-high 10 rebounds. The girls shot 10 of 49 from the field (20 percent) and 5 of 15 on free throws. They had 10 turnovers; Plevna had 19.