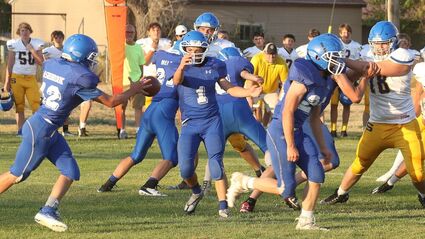 Bulldog quarterback Chace Loehding pitches the ball to running back Zander Ashbrook during the Bulldogs' football game versus the Scobey Spartans at home last Friday.

The Bulldogs had twelve men suited for their varsity football game versus the Scobey Spartans on September 2nd in Ekalaka. Three upperclassman were out with injuries for the game; seniors Avory Matthews and J.W. Elmore and junior Ethan Frye.

Blue received the opening kickoff and fumbled on their first offensive play. Scobey scored on their first play, and eventually went up 20-0 in the early going. The Bulldogs did put together a few good drives and settled in after their early woes; one drive was capped on a quarterback sneak up the middle for a touchdown, but two more stalled out after t...