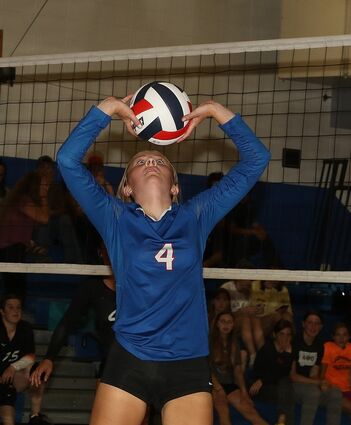 Both the JV and varsity girls' volleyball matches versus Jordan at home on September 3 were tightly fought contests, but unfortunately, Jordan won both.

In JV action, the Lady Bulldogs were neck and neck with the Lady Mustangs the entire way. They lost both of the first two sets, 23-25. In fact, no set was separated by more than two points the entire match. Blue won sets 3 and 4, both of which were scheduled to go to 15 points. Both ended 17-15 in Lady Blue's favor. In the final set, the girls battled but eventually lost 15-17.

The first set of the varsity match felt very much like the JV game. The set ended with 62 total points, 32-30 in favor of the Lady Bulldogs. The Lady Mustangs came back to win the next three sets though, and won the match in four. After the tightly fought first set, Jordan won by seven points, 5 points and 11 points. Heidi LaBree led the team in aces (5 of 14) and kills (10 of 32). Tyra O'Connor led CCHS in kills with 3 and Carly Aho led in assists with 16. Aho also tied with Codi Melton and Kendall Kittelmann for a team high in digs with 6 each.

On Thursday, CCHS Volleyball will take on Circle at home. Saturday they head to Scobey for a tournament.